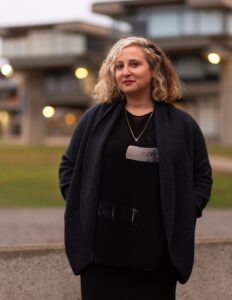 The College of Arts, Humanities and Social Sciences (CAHSS) is delighted to announce the appointment of Rebecca Uchill as director of the Center for Art, Design and Visual Culture (CADVC), overseeing the operations of the CADVC’s gallery, publication program, and expanded public art and cultural programming. Uchill joins UMBC following the retirement of outgoing CADVC executive director Symmes Gardner, who has been with the center since 1989, the year it was founded by David Yager, former Chair of the Department of Visual Arts, who served as executive director of the CADVC until 2009, and the passing of chief curator Maurice Berger, whose life was lost early in the pandemic.

“My colleagues and I are delighted to welcome Rebecca Uchill to UMBC as the next director of our Center for Art, Design and Visual Culture,” said Kimberly Moffitt, dean of the College of Arts, Humanities and Social Sciences. “We were all very impressed by her remarkable reputation as a scholar, educator, and curator. We look forward to her leading the CADVC with her tremendous energy, enthusiasm, and commitment to visual culture at UMBC and in our surrounding Baltimore community.”

“It is an honor to join CADVC, which has a rich history of producing major exhibition projects with social and artistic significance,” said Uchill. “CADVC is rooted in a brilliant research university, and it embodies all of the most exciting possibilities for how art can help us to think more deeply about work across disciplines, and draw us far outside of the existing boxes. I am thrilled to join a dynamic team of faculty, students, and staff in envisioning how a university art gallery can serve a campus and broader community in this contemporary moment.”

Rebecca Uchill comes to UMBC from UMass Dartmouth, where she has served as director of community engagement initiatives at the College of Visual and Performing Arts. A curator and art historian, her work focuses on the institutional conditions for the production, display and dissemination of art and visual culture.

Her scholarship is highly interdisciplinary: Uchill was a Mellon Postdoctoral Fellow with the Center for Art, Science & Technology (CAST) at MIT, where she co-convened BEING MATERIAL, the second CAST symposium. She is co-editor of two CAST/MIT Press publications: Being Material (2019) and Experience: Culture, Cognition, and the Common Sense (2016), for which she was also the curator of the book’s many multi-sensorial artist contributions. She is dedicated to fostering opportunities for the development of research-based and community-oriented art by contemporary artists: as editor-in-chief of Art Journal Open, Uchill created new protocols for publishing peer-reviewed intermedia projects; recently, she co-created a pilot student artist residency program focused on labor rights and labor organization.

Uchill has worked as a curator for institutions including the Carpenter Center for the Visual Arts at Harvard University, the Indianapolis Museum of Art, and MASS MoCA. Her latest exhibition, Nancy Holt: Massachusetts, was supported by the Henry Luce Foundation’s American Art Program. Her research in the history and theory of modern and contemporary art and cultural stewardship appears in such journals as Architectural Theory Review, Journal of Art Historiography, and Journal of Curatorial Studies.

The CADVC is one of four research centers based in CAHSS. It has a storied history of significant traveling exhibitions including the 2012–13 For All The World to See and Fred Wilson: Objects and Installations 1979-2000, the artist’s first retrospective in 2002. CADVC also maintains and produces programming for the UMBC Joseph Beuys Sculpture Park, a greenspace that was created in tribute to the work of artist Joseph Beuys in 2001.

The next academic year’s programming at CADVC will open with the major exhibition Oletha DeVane: From the Realm of Dust (September 22 – December 17, 2022), organized by guest curator Lowery Stokes Sims. The exhibition is the first retrospective of the internationally exhibited artist, and will include prints, paintings, assemblages, installations, and videos and be accompanied by a full-color 120-page catalog. The opening reception, which is free and open to the public, will be held from 5 to 7 p.m. on Thursday, September 22.

Also upcoming in January 2023 is Tahir Hemphill: Maximum Distance Minimum Displacement, a new project that investigates the linguistic and cultural complexity of rap through the application of Hemphill’s computational analysis that draws out and reconstructs what is visually unseeable in the semantic structures of the genre’s text corpora.